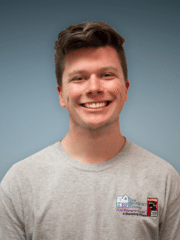 Mike Thomas is the Assistant Project Manager for Total Basement Finishing, a Blackdog Affiliate. Growing up in a family so involved in construction, Mike always had a knack for this type of work, and can confidently say he has had a lot of experience in the construction field. Whether it was working for his father’s company starting at age 15 or going to school to become an electrician, working and learning different abilities has made Mike a jack of all trades. Mike took this position with TBF because he wanted to broaden his skill set and learn the ins and outs of the production side of things rather than the labor-intensive side.

When asked what he loves about Total Basement Finishing, a Blackdog Affiliate, Mike replied that funnily enough, he grew up always seeing the Blackdog fleet around his town (Windham, NH). Knowing that Blackdog is one of the most highly successful and respected residential remodeling companies in southern New Hampshire, he always pictured himself wanting to be a part of a similar team. What Mike likes most about working for TBF is how they welcomed him with open arms and gave him the respect he was searching for. His day to day work challenges him, and pushes him to "become the best I can be". He is grateful to be involved in helping transform client's dream projects into reality.

Outside of work, Mike is quite an adventurous person. Whether it is backcountry snowmobiling in the winter months or playing a round of golf in the warmer seasons, he is always interested in taking on new challenging activities. He enjoys anything that has to do with his friends and family and cherishes the time spent with whomever, whenever!

Back to Previous Page Back to Meet The Team

We serve the following areas